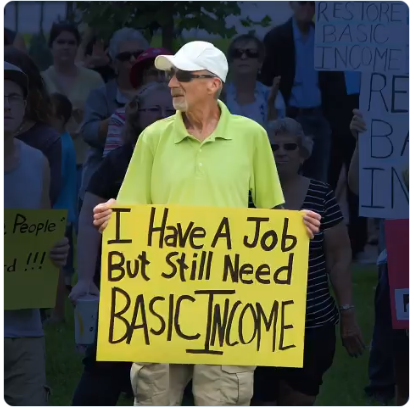 It’s 2022, Two Years since the Pandemic started to affect Canadians from sea to sea to sea. This has been a rough and troubling time, and for the first time in what seems like years, there is some good progress being made in the drive towards a national Guaranteed Livable Basic Income.

Today, Senator Kim Pate, published an open letter to Justin Trudeau’s government showing further support of 44 Canadian Senators towards the goal of a Guaranteed Livable Basic Income and to push for further development of a pilot in PEI which the Province has asked for. This means, for our list here at For The Future of Canadian MP’s and Senators it is now up to 50 Supporting, 1 Not Supporting, and 41 Unknown (or a new swing of 4 more in favor) meaning it’s now a Majority in the Senate. You can find our list easily at http://www.forthefuture.ca/who

I have for the last year and a half, been solely advocating independently of a National Basic Income that isn’t Universal, but it is tax-free and wide across the nation. I use statistical information that has already been published, not some random blind study and plug it into my excel and analyze, just how this could affect everyone. So what you read here, this is an opinion and that is “It’s about time we get serious.” The majority of the Canadian Senate is in support of this, the federal government is run by two leading parties that support it already, so why isn’t this getting done sooner rather than later, when we release the newest projections of the poverty line with the Census data due next month.

YES, I’m long winded, and hopefully ringing in a little info here, because logic would dictate if we have the capability to give $400 BILLION yeah that’s with a B folks, to the banks to stabilize a housing market, that would no doubt be stabilized if 19 million Canadians could afford their rent, but Basic Income as costed out, would be about $192 Billion for 19.8 Million Canadians. Yeah a lot of numbers, so let’s break it down a little easier for you.

If you would like to see an update to the rates please visit https://www.forthefuture.ca/2022rates

Well it starts by signing a petition…

Why is the program only 18-64 and why is there no Territories?

So the Population Chart of Canada or it’s Province and how many Canadians would be helped is by this report then followed by this updated report. YES it is not perfect, YES it is not inclusive of over 65, YES it is not inclusive of under 18, that’s the point, it’s a BASIC INCOME. There is already CCB, CCP, OAS, GIS, etc. This report says it couldn’t get population data on Yukon, North West Territories, or Nunavut, so it’s not that the program can’t encompass more, it’s that it can’t statistically give you all of the data and costs. This is an estimate.

What am I trying to accomplish here at For The Future?

Well I’m trying to get one MP to request from the Parliamentary Budget Officer a new report because I believe the last one done, was using 2018 rates instead of 2022. This would have made all of the projections from the people at the bottom all the way to the top incorrect. So if the projections were that half of poverty would be alleviated within one year, and the rates were 4 years behind, then what really would the program have done, and what kind of impact would it have on the higher class of income if it encompassed everyone up to $120k a year, just like the original report had in it, but not the incorrect one, it only looked at one of 3 scenarios. I think Canadians deserve proper answers especially when your talking about saving BILLIONS TO TRILLIONS on this decision.

If you enjoyed this article, please support my efforts by sharing this tweet. Thank you.